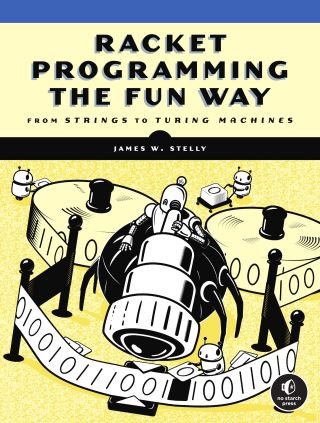 From Strings to Turing Machines

An introduction to the Racket functional programming language and DrRacket development environment to explore topics in mathematics (mostly recreational) and computer science.

At last, a lively guided tour through all the features, functions, and applications of the Racket programming language. You'll learn a variety of coding paradigms, including iterative, object oriented, and logic programming; create interactive graphics, draw diagrams, and solve puzzles as you explore Racket through fun computer science topics--from statistical analysis to search algorithms, the Turing machine, and more.

Racket Programming the Fun Way is just like the language itself--an embodiment of everything that makes programming interesting and worthwhile, and that makes you a better programmer.

James. W. Stelly: James W. Stelly is a semiretired systems analyst and developer of several business-line applications utilizing backend databases. He has degrees in mathematics and computer science from the University of Houston, and this book is a result of his lifelong interest in those topics.